BKK Heating in Bergen has upgraded control systems in the entire district heating system. Boiler selection system is upgraded with graphical representation of all heat sources, and computer based solution for their prioritization. Boiler selection system provides fully automatic start, stop, and the regulation of the heating load from ten sources of heating spread over the three heating plants.

Old heating sub-centrals have been upgraded with new automation and integrated into the overall control system for the boiler houses. In the middle of district heating main, between Fana and Bergen City Centre, there is booster pump that starts and stops automatically, according to the actual energy load on the district heating system. One of the purposes for the steering system is to use as little fossil fuel at the peak load as possible. This is achieved, among others, by accumulating heat from the district heating net. The temperature in the net can be increased by about 20 degrees without the thermal strains are unacceptably high. The net contains about 5000 cubic meters of water. Adding in the temperature 20 degrees to the heating temperature in the net is equivalent to storing a heat quantity of 50 MWh.

When heat production in the waste incineration plant is greater than the consumers' heating load the boiler selection system intends to accumulate energy in supply and the return lines in the district heating net. And vice versa - when customers ' heating load is higher than the heat production in the waste incineration plant, the control system brings the temperature in the net down by allows to remove heat the Web's temperature go down 20 degrees before the fossil will be linked degrees prior fossil fuels are used. This helps ensure that the difference between the heating load at night and daytime is reduced considerably. Utilization of heat from waste incinerators plant thus increases, while the CO2 emissions from fossil fuel get down.

NORSK ENERGI’s role in the project:
On assignment from BKK Heating, Norsk Energi made the revised function description for the new control system for district heating system in Bergen. This comprises three heating plants, booster pump station and approximately 400 heating heating subcentrals for the whole BKK Heating. Norsk Energi has participated in all phases of the projects including commissioning. 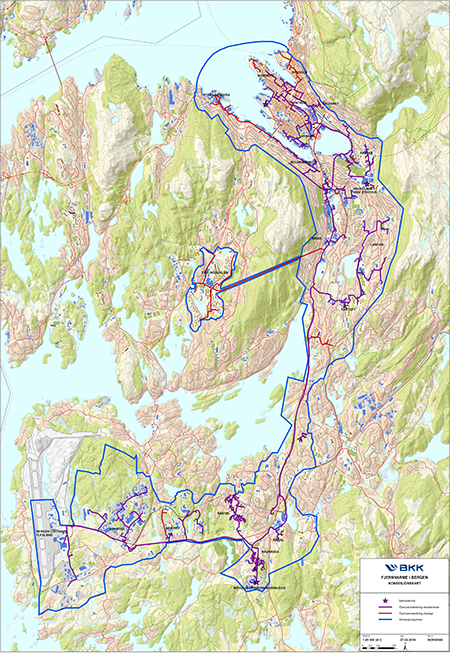 District heating network of BKK Heating stretches all the way from Bergen Flesland airport to the city centre. 90 % of the heat comes from waste incineration, 5 % - electricity and 5% oil and gas. Boiler selection system helps to keep the consumption of oil and gas at a minimum.