In November 2017, the Environmental Ministers of Barents Euro Council decided to exclude three Environmental Hot Spots. Norsk Energi presented work done for the exclusion of the Hot Spot on Wood Waste in Komi (Komi Ko7) at this high-level meeting.

Hot Spot K07 is located in the republic of Komi, North-West Russia.The Norwegian Minister of Climate and Environment Vidar Helgesen officially concluded the Norwegian Chairmanship of the BEAC Working Group on Environment (WGE) in 2016-2017. One of the main results is that three Environmental Hot Spots are now excluded from the list of the Barents Hot Spots: Arkhangelsk Pulp and Paper Mill (A4), Reduction of dust emissions by Vorkuta cement plant (Ko2-1) and Wood processing industry waste management in the nine forest districts of the Komi Republic (Ko7). 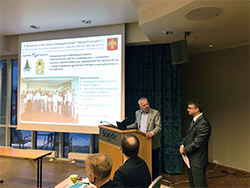 The huge amounts of wood waste accumulated from the timber processing industry in Komi has for decades led to harmful emissions of methane. This was the reason that wood waste in Komi became a so-called Barents Environmental Hot Spot (Komi Ko7). The AMAP-report from 2003 defined: «In 2002, timber and pulp and paper industry of the Komi Republic produced 1071 thousand tons of wastes, largest part of them is timber wastes, stored at enterprises and at various landfills».

In 2013, the Komi Ministry of Industry and Transport took the initiative to start using wood waste as fuel for energy production in a larger scale and it started subsidizing establishing wood waste logistical centers and production of biofuels. Since then, about 20 plants for production of wood pellets and briquettes were set up and about 75 boiler house have been converted from coal to biomass. The use of wood waste as fuel, as a result of this initiative, gave a greenhouse gas emission reduction of about 300 000 tons CO2-equivalents in 2017.

The Hot Spot on wood waste in Komi (Komi Ko7) was excluded from the Barents Hot Spot list upon the decision of the Environmental Ministers of Barents Euro Council at the meeting in Vadsø. 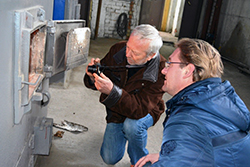 The first boiler house on briquettes in Kortkeros district of Komi Republic started up in October 2014.Norsk Energi and the Russian Cleaner Production and Sustainable Development Center in Moscow support Komi Bioenergy Program as a part of the Norwegian-Russian Bilateral Cooperation in Barents Region, since 2013 they have performed six combined training and project development programs; all related to bioenergy generation.

Throughout the training sessions, the participating companies develop their own specific bioenergy projects from a technical, economic and environmental viewpoint. By the end of training, the investment proposals are presented to the top management of the companies and to Komi Ministry of Industry, Natural Resources, Energy and Transport of the Komi Republic that may provide grant support.

Hans Borchsenius says that "29 investment projects were developed through these programs and nine of them have received financing and implemented. In addition, we support bioenergy web-portal in Komi and a number of promotion activities".

The Norwegian Environmental Agency has recently published the factsheet on the exclusion of the Barents Hot Spots (http://www.miljodirektoratet.no/no/Publikasjoner/2017/November-2017/Environmental-Improvements-at-Barents-Hot-Spots). The Factsheet acknowledges the role of Norsk Energi and Russian Cleaner Production and Sustainable Development Center in the Ko-7 exclusion.

International Barents Cooperation on Environmental Hot Spots
The Barents Euro-Arctic Council (BEAC) is the forum for intergovernmental and interregional co-operation in the Barents Region. It gathers together Norway, Sweden, Denmark, Finland, Iceland, Russia and the EU, as well as their regional authorities to promote stability and sustainable development in the Barents Region.